Home / Our Blog / Case Study: How Easily Nanny Taxes Can Be Overlooked

Case Study: How Easily Nanny Taxes Can Be Overlooked 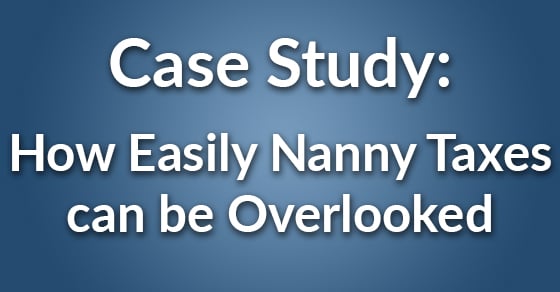 Nanny Taxes are a very narrow but complex piece of the tax code; as such they are easy to miss and can cause considerable headaches to fix. The following case study is from a real client. The names have been changed but the rest is true.  Read on for an example of what can go wrong, even for the best of us.

John and Jane welcomed a new member to their family but were also busy with full time careers. Like most families, they needed a childcare option for when they returned to work. Complicating matters was that the nature of their work caused odd/extended hours, making coordination with a daycare challenging.

After researching options they decided that the flexibility of a nanny would be the best fit for their family, so they took to finding candidates.

John and Jane turned to the internet like most people these days do. After some time they eventually came across Stephanie. She was in their area, available, and had experience as an Au Pair. To the Smith’s, Stephanie looked like a great fit. They interviewed and hired her. There was a wage negotiation and once everyone was happy Stephanie began caring for the Smith’s new baby.

HWS – This was the first step afoul, unbeknownst to the Smith’s (and most people). We commonly talk to clients about Au Pairs and how they are different than Nannies. An Au Pair is actually an incredibly specific type of  child caregiver. They are foreign nationals in the U.S. on a J-1 Visa allowing them to work as a childcare provider while attending school. There are limits to the tasks they can do and the number of hours they can work in a week. Most importantly here, they are only allowed to work for the sponsoring family, i.e. the ones that helped them get the visa in the first place. If you didn't hire the caregiver through a US Department of State authorized au pair agency, she is not an au pair!

For the next several months all was well. Stephanie was doing a good job, the Smith’s were paying her regularly, and everyone was happy.

HWS – Now technically speaking, just because everyone is happy doesn’t mean things are right. There are things like pay stubs, timesheets, and taxes that weren’t happening here. That said, work was being done and wages were being paid so the status quo seemed fine.

As the end of the year approached John realized that they would have to give Stephanie something to account for the wages but didn’t know what. He asked a friend, a fellow CPA that specializes in personal taxes, what was needed. His friend told him that Stephanie needed a W2 and that the family needed to complete a Schedule H to add to their tax return. That conversation was the light switch John and Jane needed to realize there was a problem.

HWS – In all honesty the Smith’s were lucky here. Many CPAs we talk to would have just said “give her a 1099” identifying her as an independent contractor. This is called worker misclassification and simply providing a 1099 does not absolve you of your obligations as an employer.

With a healthy sense of urgency they took to finding someone to help them sort this all out. After some comparison shopping and a free consultation with us they decided HomeWork Solutions was the right fit to help them out of their jam.

Just when you think the story is over, there is one more hiccup. Remember how Stephanie had experience as an Au Pair and that they are a specific type of employee? Well, the Smith’s were not her original employer and she did not transfer the visa, so when it came time to collect the needed information for tax filing she politely refused to supply her social security number. You see, if she was reported as an employee of the Smith’s she would be in violation of her visa.

For the Smith’s as employers this isn’t the end of the world. We were still able to file everything and make sure their tax obligations were met. Truth be told, there is still some risk left over after the taxes were filed, as the Social Security Administration may come asking for a Tax Identification Number (TIN) for the employee in the future. The Smith’s employee was not eligible to work for them, and the problem can’t be solved by paying a penalty.  They did the right thing and ended the employment relationship with Stephanie as soon as they realized the issue and ensured all taxes were paid.

The moral of the story here is twofold. First, nanny taxes often slip through the cracks, even for financial professionals who should know better. Second, there is always the option of going back and correcting things. In this case, as with all back tax situations, the Smith’s ended up paying extra because of the penalties and interest added to the tax obligation. However, they now have a clear conscience knowing their tax obligations as household employers have been met.

Do you have questions on how to pay your nanny or household employee legally? The experts at HomeWork Solutions offer free telephone consultations and are happy to discuss with you the particulars of your situation to help you stay on the right path.