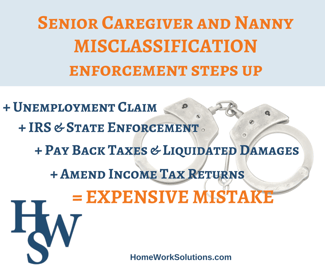 Most Workers are Employees!

The US Department of Labor's Administrator of the Wage and Hour Division, David Weil, clearly stated on July 15, 2015 that most workers are considered employees under the Fair Labor Standards Act, as he issued new guidelines aimed at limiting the misclassification of workers as independent contractors.

Mr. Weil, administrator of the department's Wage and Hour Division, said “When determining whether a worker is an employee or an independent contractor, the application of the multifactor economic realities test “should be guided by the FLSA's statutory directive that the scope of the employment relationship is very broad.”

“The correct classification of workers as employees or independent contractors has critical implications for the legal protections that workers receive, particularly when misclassification occurs in industries employing low wage workers,” Weil said.

Weil's goes on to state "In order to make the determination whether a worker is an employee or an independent contractor under the FLSA, courts use the multi-factorial “economic realities” test, which focuses on whether the worker is economically dependent on the employer or in business for him or herself.1 A worker who is economically dependent on an employer is suffered or permitted to work by the employer. Thus, applying the economic realities test in view of the expansive definition of “employ” under the Act, most workers are employees under the FLSA."

Jennifer Prosperino, CPA/PFS advises her clients "If you misclassify a worker, you may be held liable for employment taxes for that worker as well as significant State and local penalties."

The US Department of Labor is aggressively seeking liquidated (i.e., doubled) damages, and penalties, when workers are found to have been misclassified, according to Daniel A. Schwartz, Esq.

The AFL-CIO, and particularly it's member union SEIU, have been particularly active with Domestic Workers United (DWU) to draw attention to the rampant misclassification in the domestic service arena - particularly senior caregivers and nannies. According to the AFL-CIO, "Employers misclassify their employees by giving them an IRS Form 1099 rather than a W-2, or by paying them in cash and not withholding any taxes." This practice makes it easier the domestic worker's employers to underpay them and violate their employment and labor rights.

According to the National Employment Law Project (NELP), "Because of their status as non‐employees, misclassified “independent contractors” miss out on: minimum wage and overtime requirements, workers’ compensation, unemployment insurance, ... Independent contractors have to pay more taxes, too: they are responsible for paying the employer‐ and employee‐side FICA and FUTA taxes, or 15.3 % of their gross wages, while employees pay only 7.65%, for instance."

IRS, the US Department of Labor, and State Unemployment Commissions Coordinate Enforcement

The Internal Revenue Service, the US Department of Labor and 35 state unemployment commissions are now coordinating enforcement of unpaid taxes and misclassification under a program started in 2011. When a misclassification issue surfaces - typically by a discharged worker filing an unemployment claim at the state level, these three agencies are all automatically notified for enforcement and collection of back taxes.

HomeWork Solutions has helped many employers who have found themselves on the wrong side of the law, dealing with aggressive state and federal enforcement. HWS offers free telephone consultation and welcomes your call if you have a question about classification of your household worker.

Nanny Misclassification and the 1099 Mistake

Employee or Independent Contractor: Enforcement in the Senior Care Industry

US Department of Labor: Employee or Independent Contractor?