New York City's Paid Sick Leave Law DOES cover household employees. The coverage, however, is a bit different than for workers employed by commercial or public enterprises. 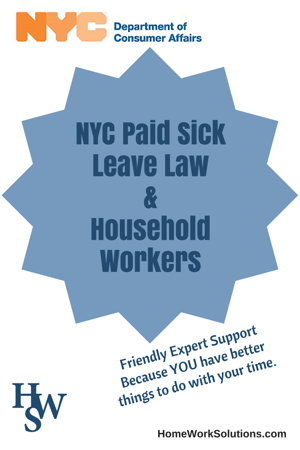 Household employees who have worked for the same employer for at least one year and who work more than 80 hours a calendar year earn two days of paid sick leave under New York City law. The two days of annual sick leave become available at the one-year anniversary of employment.  This applies to all household employees who work in NYC, regardless of where they live. The NYC-mandated sick leave is in addition to the three days of paid rest to which domestic workers are entitled under the New York State Domestic Workers Bill of Rights.

Household employers that already provide at least five days of any kind of paid time off (i.e., personal days, vacation and sick leave) would not be required to provide any additional sick time, either paid or unpaid, under the law.

This law does not cover household workers who: