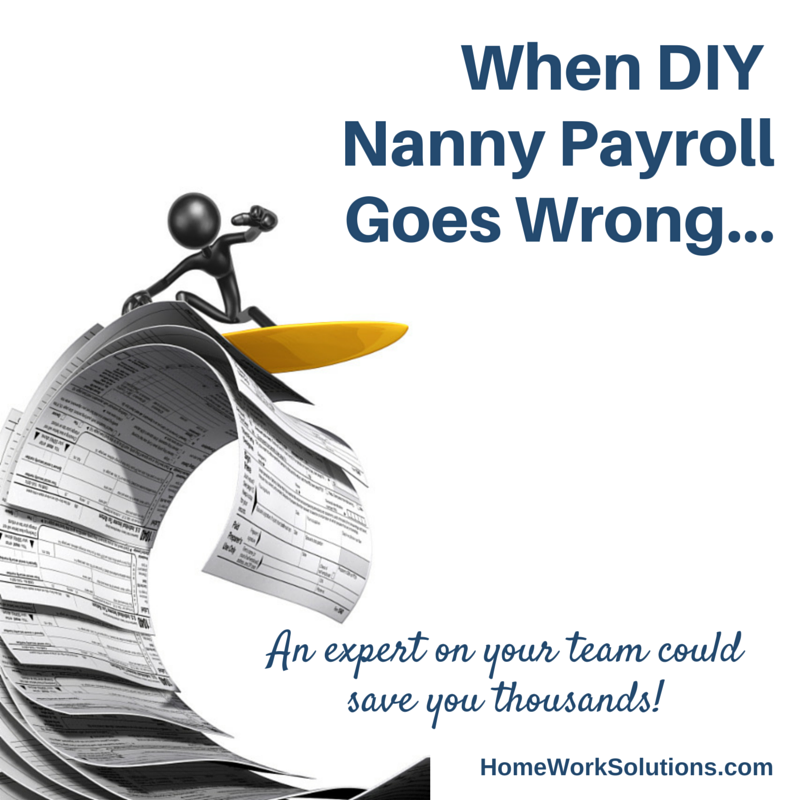 There’s no doubt about it. Nanny taxes are complicated. There are federal and state taxes, as well as federal and state labor laws that need to be upheld. For some families, while taxes can be a little overwhelming, they think that they can figure it out themselves. This can be done, but before you do it yourself, you need to know it all – the ins and outs of preparing nanny taxes. If not, the do it yourself method can go terribly wrong. Consider this case study of a family that thought they had a good understanding of tax filings, but in fact, ended up making some costly errors.

Background:
A family hired a nanny full time to work 45 hours a week. They agreed to pay $720 a week, which they calculated as $16 an hour. Every week they paid their nanny and gave her a pay stub that showed 45 hours at $16 an hour. They did all the required tax filings on time and thought they were in great shape.

The challenge:
The family became dissatisfied with the nanny and fired her after 10 months. The nanny filed for unemployment, which the family felt was unfair since she didn't live up to their expectations. They thought she was fired for cause, and fought the claim. Meanwhile, the nanny was equally unhappy, and when the family contested her unemployment claim she consulted with her state's Wage and Hour board and filed a claim for unpaid overtime.

The situation:
The nanny argued that she should have received time and a half for her five hours of overtime hours every week, and she was owed the difference in back pay. The Fair Labor Standards Act (FLSA) states that "any employer" who violates minimum wage or unpaid overtime compensation laws may be liable for both the shortfall and liquidated damages. This means that the family could be responsible for double the damages. The amount was $40 per week, for 46 weeks, or $1840. This amount was doubled and it was deemed that the family was required to pay $3680 in back wages. The family also had attorney's fees as they paid for representation in the matter.

The solution:
This ended up being a very costly problem that could have been avoided if the family consulted with a household payroll specialist when they initially hired the nanny and set up payroll. They could have been coached on how they could have paid the nanny the flat $720 a week and state the wage in both hourly and overtime terms.

You might think that you’ll save money by doing nanny payroll taxes yourself. But as demonstrated above, one simple mistake can yield serious unexpected penalties, taxes or costs. Planning ahead while working with a household payroll specialist like HomeWork Solutions from the very beginning can help you avoid costly errors.