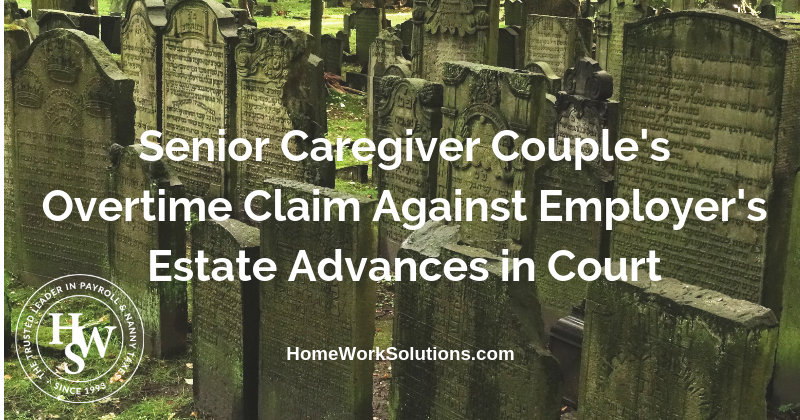 A federal district court ruled October 15, 2018 that a senior caregiver couple's unpaid overtime claim against the estate of their deceased employer may proceed.

In the case of  Stalnaker v. Estate of Beall, the married senior caregiving couple alleges  that they were not paid overtime wages due them in violation of the Fair Labor Standards Act and West Virginia labor laws.

According to the facts presented, the couple's duties included general household maintenance, grocery shopping, cooking and cleaning as well as senior caregiving tasks such  as bathing and dressing, attention to the  employer's medical needs including physical therapy and transportation to medical  appointments.

The senior caregivers claim they worked about 84 hours a week, that they "were daily covering opposite 12-hour shifts," and they were paid the same wage regardless of the number of hours they worked. When they approached their employer's widow in their efforts to recover unpaid overtime wages, the widow  claimed the couple were not covered under the FLSA because they did not engage in interstate commerce and that West Virginia law provides that the personal representative of an estate cannot be held personally liable "for any debt or demand against the decedent" after the distribution of the estate "unless, within the time fixed for presentation of claims or for suing thereon, such claim was duly presented or action or suit thereon commenced and process served on such personal representative." W. Va. Code § 44-2-23 .
The federal district  court ruled on the first claim that the couple were in fact FLSA covered employees because they engaged in telephone communications across state lines, sent and received correspondence from various states, and delivered and picked up legal and business documents affecting the employer's commercial activities. Such activities are sufficient to show that the couple were engaged in interstate commerce for the purpose of individual coverage under the FLSA, the court said.
On the second claim that the demand was made after the distribution of the estate, the court ruled a claimant "who has not [timely] presented his claim . . . may, if not barred by limitation, bring a civil action against the distributees and legatees, jointly or severally, at any time within two years after such distribution." W. Va. Code § 44-2-27
The defendant, Estate of Beale, also entered a new argument in their reply brief that Plaintiffs are not entitled to overtime pay under the FLSA because they provide "companionship services" and are "live-in domestic workers." Because this was argued in the reply, it was not addressed in this ruling. HWS notes that under federal law, a live-in domestic worker under the FLSA is not entitled to an overtime differential, yet must be paid their hourly pay rate for every hour they work. While many states have laws that extend overtime protections to live-in domestic service workers, West Virginia does not.
This is not the first time estates have become embroiled by civil claims regarding wage payments and/or payroll tax payments after the employer dies. Key take-aways include:

The HWS Hourly Pay Rate Calculator exists to help families and their advisers properly translate a weekly wage into appropriate hourly and overtime rates to facilitate FLSA compliance and help avoid these type of civil actions after the fact. This points out the importance of a well written compensation agreement with all household service workers.