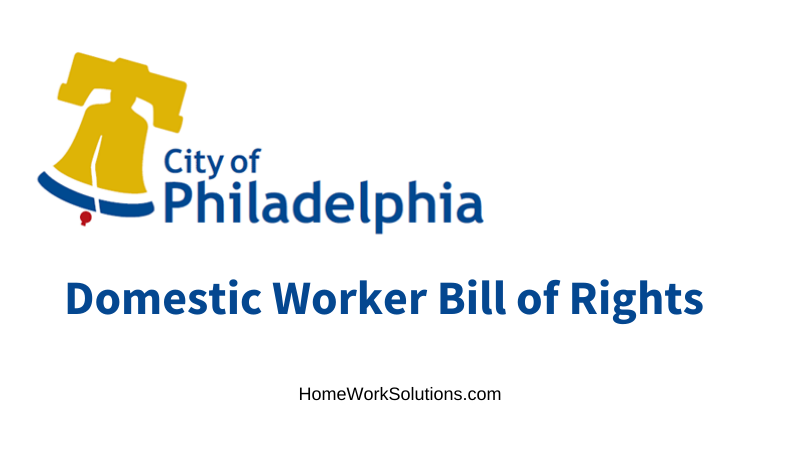 The City of Philadelphia joins 10 states and two other cities with legislation known as a Domestic Worker Bill of Rights. This legislation is part of a decade long community level movement nationwide to establish basic worker protections to the growing domestic services industry. While the numbers of nannies and housekeepers remains stable, the in-home senior care component of the domestic services field continues to experience vigorous growth as aging baby boomers overwhelmingly prefer to "age in place," therefore requiring senior caregivers to help them remain safe and independent.

The Philadelphia legislation becomes effective in May 2020.

Key features of the Philadelphia Domestic Worker Bill of Rights are:

Full Text of the Philadelphia Domestic Worker Bill of Rights is found here.

It is important to understand that the vast majority of household workers - nannies, senior caregivers as well as housekeepers and maids - are employees. Generally the entity paying the worker is the employer. Families who attempt to circumvent the laws by claiming their nanny or caregiver is an independent contractor run the risk of being pursued for misclassification.

Misclassification is the abusive practice of treating an individual who is an employee under the law as an independent contractor. This is abusive because the worker as a result is denied the protections of workers' compensation, unemployment insurance, and wage and hour protections. Philadelphia and Pennsylvania as a whole participate with the US Department of Labor's information sharing initiative, initiated under the Obama administration, to facilitate enforcement against employers participating in misclassification. Enforcement generally involves pursuit of all back federal and state taxes, obligating the offending employer to fund even the taxes they should have collected from their employee.

Wage theft is closely related to misclassification, and is the practice of not paying workers for all hours worked, not paying legally required overtime, or making improper deductions from your pay. Philadelphia's DA Larry Krasner's task force on Crimes Against Workers is focused on criminal prosecution of employers who knowingly practice wage theft and/or misclassification.

Bottom line - Philadelphia household employers need to educate themselves regarding their employee's rights and their responsibilities under the Philadelphia Domestic Worker Bill of Rights, as the political climate both locally and in the US Department of Labor is focused on worker rights and worker abuses, and wage theft and misclassification costs workers and the government on all levels substantial levels of income, income the taxing authorities are anxious to recoup.