Home / Our Blog / National Domestic Workers’ Bill of Rights: What does it mean?

National Domestic Workers’ Bill of Rights: What does it mean? 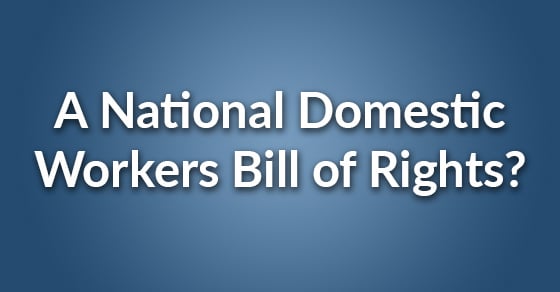 Not a New Idea

The federal government looks to follow the lead of states on this. California, Connecticut, Hawaii, Illinois, New York, Massachusetts, Nevada and Oregon all have a domestic workers’ bill of rights. These are even popping up at the city level with Seattle enacting one effective in July 2019 and the Philadelphia city council considering a similar proposal at this time.

These laws include things like guaranteed rest breaks, adjusted overtime pay, pay stub requirements, and more. The aim is to help domestic workers be treated like the professionals they are. The National Domestic Workers Alliance has created a nice summary of the proposed national law, which you can read here.

Our Take at HWS

As advocates for fair and legal domestic employment in general, we are happy to see this type of law gain traction. As our clients nationwide can attest, treating your employee fairly only benefits and strengthens the employer/employee relationship.

As our clients nationwide can attest, treating your employee fairly only benefits and strengthens the employer/employee relationship.

As always, we’ll keep an eye on what happens with this proposed law and update this post if/when there are meaningful changes.