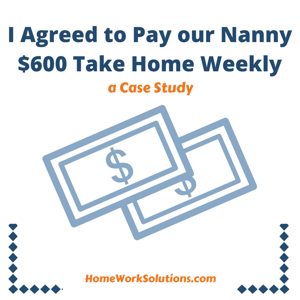 Susan G. is a licensed social worker and a new mom who came to HomeWork Solutions when she and her husband hired a nanny so she could go back to work. Susan and her husband found the ideal nanny via a neighborhood list serve and readily agreed to her request for a weekly wage of $600 take home after taxes. Susan found that getting all of the reporting and tax calculations right – particularly when working from a net take home pay – proved to be a headache.

A self-described “people person”, Susan was very uncomfortable dealing with the numbers and tax calculations. After several false starts over a period of months, Susan realized that she needed professional help with this. She did research online and by talking to her neighbors, and contacted HWS for help.

HWS’ Mary Crowe explained exactly what her responsibilities were as a household employer, how our service works, and was able to get her enrolled in a service where she continued to pay her nanny the $600 per week and HWS assumed the tax reporting and remittance activities. Most importantly in Susan’s case, we were able to do the reverse calculations working from a net take home pay to compute the nanny’s gross wage and payroll tax deductions.

Susan and her nanny had agreed to a weekly net pay without ever doing the calculations to find out what the actual gross wage was. Susan did not know, in essence, how much she had agreed to pay her nanny. She spent quite a bit of time chatting with Mary, another “people person” who is very good with numbers working to understand the process. She was aghast to learn that she had actually agreed to pay her nanny $800 gross per week, or $41,600 per year, and that when her employer taxes were added to the mix her total cost was over $45,000 annually. Susan burst into tears on the phone with Mary when the enormity of her financial commitment became clear to her.

“Mary was very soothing to work with, especially when she realized how freaked out I was by what I had done. Most importantly she presented me with options – solutions -that balanced both my interests as well as our nanny’s.”

‘Take a deep breath’ Mary advised ‘You are not the first person who has had this light bulb moment. Let’s talk about options.’ After running the numbers for a couple of different situations, Susan decided she needed to renegotiate the contract with the employee.  Mary emailed her with options that included the Gross to Net wage information for several different scenarios, including having Susan simply gross up for the Social Security and Medicare taxes and transferring the income tax responsibility to the nanny.

Susan was now armed with the information she needed to have a difficult conversation with her husband.  Together they presented this information to their nanny so they could work on a solution they could all live with.

A few days passed, and Susan called in to let us know that the conversation went over much better than she had expected. The nanny didn’t realize how much the taxes added to her pay. The nanny was agreeable to a middle ground resolution, with Susan still paying her $600 a week but only net of the required Social Security and Medicare taxes. The nanny understood that she was on her own for her income taxes. At Susan’s urging, the nanny reached out to Mary too and was educated on what her approximate income tax obligations would be so she could plan her finances.

“This was such an emotional problem for me – I knew my family could not afford what I had promised the nanny. Add the stress of talking about wages with the person who cares for our precious child and risk that relationship – let’s just say I was a mess. Mary, along with everyone I interacted with at HomeWork Solutions, was always available, incredibly patient and very responsive.”