Home / Our Blog / Can I Pay My Nanny in Bitcoin?

Can I Pay My Nanny in Bitcoin? 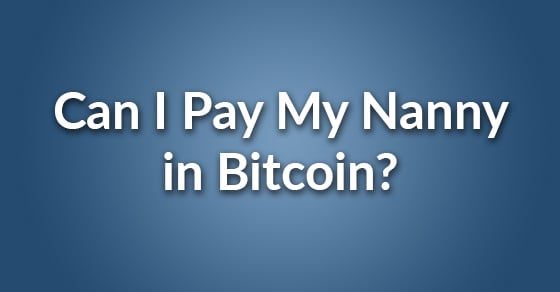 Virtual currency has had a rapid rise in popularity and thus regulators are still trying to really figure out how to manage (tax) this new form of commerce. Some employers see this as an opportunity to capitalize on the gray area and potentially avoid some tax costs.

Unlike cash or a credit card, virtual currencies are all online. This makes using them in everyday life a little challenging. That said they function similarly to actual money where you have an account and can transfer value between people or businesses. Some large retailers and online businesses do accept virtual currency.

These currencies are based on real money and you can use actual currency to buy them. You purchase them though exchanges and then can use your virtual currency as you see fit. There are usually transaction fees at the time of initial purchase but then things like foreign fees or processing fees don’t apply as you use the virtual currency.

How the Taxes Work

In 2014 the IRS issued limited guidance establishing virtual currency as property, not money for tax purposes. This means that a business receiving a virtual currency reports it as income based on the market value of the currency at the time of receipt.

Wages paid using virtual currency are taxable to employees and must be reported by employers on W-2 forms. They’re subject to federal income tax withholding and payroll taxes, based on the fair market value of the virtual currency on the date of receipt.

Virtual currency payments made to independent contractors and other service providers are also taxable. In general, the rules for self-employment tax apply and payers must issue 1099-MISC forms.

The letters being sent from the IRS are going to people the IRS thinks might have failed to report virtual currency value, and thus pay tax on that value. It is expected that up to 10,000 people will receive this letter by the end of August 2019. The names were “obtained through compliance efforts” and came with the warning that the IRS is expanding their efforts to enforce the reporting of virtual currency. This includes a new audit initiative that started last year.

Technically speaking you can pay your nanny with Bitcoin or any other virtual currency. Doing so, at this time, will more than likely cause more complications than worth. Also until a time comes that you can buy gas or pay living expenses with virtual currency, it is likely that a nanny (or any other employee of any kind) will prefer actual money.